Why I am in peru 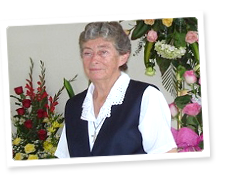 I was in about my twentieth year working at St. Joan of Arc Parish in Boca Raton, Florida, and I was teaching a class on St. Luke’s gospel to a large group of adults. There is much in Luke about the poor. A participant, Ken Schammel raised his hand and asked, “What are we doing for the poor.” There was an immediate response from the group. “St. Joan of Arc is the largest contributor to the annual Archbishop’s Charity Drive and we give to other charities as well.” But Ken insisted, “We are not involved with the poor.” Again, the participants replied, I give my time to Catholic Christian Doctrine classes to children, to Marriage Encounter, Shut-ins, etc. etc.”

Finally we decided to pray about it. God answered us very quickly when the following week I was invited by a friend to see a documentary film at the Lutheran Church commented on by the pastor Rev. Connie Brataen who had worked among the poor in Brazil. The film was about four Catholics who dedicated their lives to the poor, Archbishop Dom Helder Camara of Brazil, Dorothy Day, founder of Houses of Hospitality for street people, Mother Teresa of Calcutta and Cesar Chavez who struggled for the rights of farm workers in the USA. The film really touched me. I asked for a loan of the film and subsequently showed it at St. Joan’s. The following week I received another invitation to visit the migrant labor camp, The Pines, in West Delray and give moral support to a Mexican couple who had just been asked to manage the camp by a group from Florida Atlantic University who were involved out there.

So it all began there. Ken Schammel, his wife Marilyn and many others from St. Joan’s began going out to THE PINES and being involved there until finally one day the pastor, Fr. Pusak asked me, “Where are you working, here in the parish or out in THE PINES?” Not indeed that he was against it, quite the contrary.
We went to THE PINES on a weekly basis and began running summer camps for the 80 or so children in THE PINES and surrounding areas. It was really amazing how people got involved, giving the use of their pools for swimming, making lunches etc. etc., and not only St. Joan of Arc but also the other Christian churches. Ted Winsburg, a Jewish grower out west gave his bus free, filled with gas each day to transport the children. We had great summers of fun and games, going to the beach etc. etc.

One Sunday, Ferdinand Mafood of FOOD FOR THE POOR was speaking at St. Joan of Arc and he invited me to go with him to visit Haiti. I replied, “I do not want to visit Haiti, I want to work there.” I now had the idea of starting a mission in Haiti supported by St. Joan of Arc parish. It would be their mission.

It was the month of November of 1983 and I knew it was not the moment to ask permission of the Mercy Congregation in Ireland to start a new venture. The congregation was in the process of making changes in its structure and forming larger units. The final chapter meeting for that and the election of a Superior General as they were called at that time was due to take place in August 1984. So I decided to wait until this was in place to ask for the necessary permission.

In August I represented the Boca Raton Mercy community at this chapter meeting. God does strange things. I was elected superior general at this new unit and I had no option except return to Ireland after 24 years in Boca and take up an entirely new life and new role. I shed many tears. Part of my responsibility was to visit the various missions the congregation had in various parts of the world, the Philippine Islands, Kenya, Africa, and Peru. The sisters had been in Peru 18 years at this time, as part as the Cork Diocesan Mission in Peru, working among the poor.

On my third visit to Peru I knew that was where I was being called to minister. So when I completed my six years in leadership I set up to Peru and language school in Lima. There was a wonderful sense in Peru of building the “Reino de Dios” (the Reign of God), where there would be justice, peace and love. Somehow these words spoke more to me in Spanish than they did in English. I spent the first five years in the original Cork Mission in the town of RIO SECO. Then a Peruvian sister, Sister Dora Castro, and I started a new mission in the Andes mountains at 10,000 feet in the town of MACHE, the land of the potato. Following a bus accident six years later it was thought better to remain on more level ground in the coast in Trujillo. At that time the Mercy sisters had begun to work in a new Urban Settlement called ALTO TRUJILLO where I am at present. ALTO TRUJILLO is an area of extreme poverty outside the city of Trujillo that now has 50,000 residents and is growing. Recently named a parish, called “Jesus Solidarity” has been given to a new Spanish community called “Community of Faith and Social Action.” This vast area is divided into four Pastoral Areas, two being developed by the Sisters of Mercy and two by the Spanish group working as one parish. There we continue to work together to build the “Reino de Dios.”

WHY DO I STAY IN PERU AND ALTO TRUJILLO
When I first began working in Rio Seco individuals and the HUNGER FUND from St. Joan of Arc began to support us. This was later formalized with the setting up of the organization THE MINISTRY OF THE GOOD SHEPPHERD. The support from Boca Raton has been incredible. Not only is the support financial but members of the group visit the mission on a regular basis and are of tremendous moral support. If you visit ALTO TRUJILLO today, this huge sprawling human settlement where 50% live in straw ranchitos.

What you see at San Jose, the Pastoral area where I work,

– A lovely chapel that is full and alive every week giving praise and worship to God.
– A Pastoral Center that offers many programs of a religious, educational, and social nature to children, youth, and adults.
– A Library and Study Center with a full time librarian that is full of students every day that come to do their assignments because the necessary educational materials that they cannot afford to buy are available to them.
– Ten Care Centers where 100 children are fed each day and cared for, assisted with their homework until their mothers return from work in the evening.
– A new Technical Center built by THE FATHERS TABLE, of Florida, giving skills training to 76 adults, mostly women, and preparing them to earn their living.
– A bakery that employs 10 people.
– 26 children who were roaming the streets because their parents could not afford to send them to school, now attending Primary School.
– 35 children with special needs going an excellent Special School each morning in their comfortable bus.
– 23 young people going to college sponsored by individuals or groups.
– 28 families living in a simple but secure home instead of a straw ranchito.
– A Christian community being built based on the word of God.

And if you visit the mission in the sierra, MACHE

– A town and several villages that have come to live spiritually and economically.
– A new breed of sheep roaming the hills.
– A Technical Institute that has grown from 15 students to 170.
-A sister teaching and working with youth in the local State Secondary School that boasts of a fine computer room and new facilities.
– Young people going to college who would never have had the opportunity.

All this changes have been brought about because there were Christian people with a spirit of solidarity in Boca Raton and Ireland, as long as I can be a link uniting these people with the poor of Peru, then I believe it is worth my while staying in this country even if my memory is not as good as it used to be. I give thanks to God every day for the health and energy to walk the sandy desert roads and for the generous friends in Boca Raton and Ireland without whose help the above mentioned could not happen.