Our Mission:
– To live out the gospel of Jesus
– To serve the poor with compassion
– To seek relationships of solidarity with them
– To show respect for the dignity of people through empowerment and education

Our Vision:
A world in which the gospel is lived and alive in skilled, educated, empowered and transformed
communities of faith. 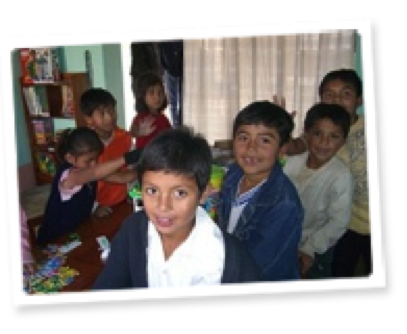 The founding of the ministry

It was 10 pm one weekday night in 1994 and I felt a strong need to call Sr. Immaculata in Peru. She freely expressed her immediate need for some playground equipment and wrought iron fencing to keep the children from running into the busy streets. Calls the following day to a few active Cursillo groups quickly produced the $2,500 for this need. Several months later we learned that sister would be passing through Boca Raton on her way home to Ireland. Another call to sister in Peru earlier that month, informed us that the Shining Path terrorist group had been all but eliminated and therefore the area school buildings were once again available for the children. However, there were no chairs, tables, or books. While Sister wasn’t asking for the money, she reluctantly shared how many of each items she needed. Doing the math quickly made it clear: $10,000 was needed.

The Bible verse “the 72 went out…” came in to my head. So I wrote a list of 11 Sister’s friends in the area and asked each of them to invite 5 people to a gathering at our home (it was our 31st wedding anniversary June 13, 1995). The theme was “Say, pray, pay and be on your way.” The menu was limited to a simple fish dip (in a fish mold) and water. We placed a small straw basket on the table in front of Sister for donations. After everyone left we took Sister to a local pizzeria (she really wanted pizza that day) and counted the cash and checks, $9,900. Sister was so pleased. I questioned where the other $100 was. Later that week the Women’s Guild delivered a check for $200 saying they would have delivered it earlier but that it needed two signatures to be valid and the second person was not available until then.

It amazed us that there were so many people who wanted to help Sister in her mission work. When we learned that Sister was again passing through Boca Raton, some of her friends and the Sisters of Mercy here were able to schedule Sister to speak at all the masses. A tired sister Immaculata received over $38,000 in donations that day.

Around this time we came to realize that many donors were extremely interested in writing off their donations. We would take their donations (made out to Saint Joan of Arc) to the pastor who would write a check for the total to Sister Immaculata. Then we gave the check to Sister Kathleen, who deposited it into Sister Immaculata’s account. Why not apply for tax exempt status someone asked. Until then, we operated as a very loosely formed group of Sister’s friends. There was no accounting or minutes of meetings kept. A friend of Sister’s suggested we call ourselves the Ministry of the Good Shepherd. He had a friend who would handle the incorporation and tax exempt filing. In short order it was done. Since we needed to fill in the blanks on the forms required (president, vice president, treasurer, secretary, etc.) we did. We began keeping a list of donors. Sister began writing her annual Thanksgiving Letter. Then we began a Newsletter…

Ed’s wife, Betty, adds: God has been with the ministry from the very beginning it has grown beyond our expectations and often develops a life of its own. We have met Peruvian people here in the states who are working with us. We have built churches, libraries, and a dental clinic; sent children to school including special needs, funded day care centers, and supplied Sister with funds for her various projects.

The Irish in Peru

Through an amazing series of events the Bishop of Cork, Ireland came to be in Trujillo, a coastal city in Northern Peru. The Bishop saw the multitude of poor that lived on the outskirts and he was moved to commit considerable resources – priest, sisters, brothers, lay people, and financial support – to serve the poor. Thus was the Cork Diocesan Mission established in Trujillo. The Irish worked collaboratively with native Peruvian priests and sisters. The Mission bore tremendous fruits in churches, schools, clinics and more.

When Sister Immaculata served as Superior General of the Sisters of Mercy, she visited the Mercy community in Trujillo and felt called to return there as a missionary when her duties as an administrator came to an end.

Mache is both a town and a district of several small villages resting at about 11,000 feet altitude. It is a four-hour drive from Trujillo over rugged – even dangerous – terrain, though the roads have slowly been improving since 1995.

The town has a lovely square with a statue of Christ and the parish church, Christ the King. There is an elementary/secondary school as well as a post-secondary Institute where students train in farming and animal husbandry.

With the help of the Ministry of The Good Shepherd, the Sisters of Mercy have built a Convent, a Parish Hall and several chapels in surrounding villages. They have also initiated many pastoral and community development programs, including workshops and lectures by visiting speakers to develop local pastoral leaders, scholarships for children and young adults, and support for the local technological institute for agriculture and animal husbandry.

Alto Trujillo, adjacent to Trujillo proper, is a sprawling new community rising on the sands of the Peruvian coast desert. It is home to over 40,000 people who have built humble dwellings, called “ranchitos,” and struggle daily to earn a living and improve their condition. The job opportunities in nearby Trujillo attract migrants from the highlands and the community continues to grow.

The Sisters of Mercy have a convent near Alto Trujillo, and from there Sister Immaculata conducts her labor of love. The Ministry funds many of Sister’s projects, including day care centers for children of working mothers, a technical center to teach useful crafts to adults, scholarships for children and young adults, a library for children, transport for special children, homes for poor families, medical crisis support, and more.